I recently attended a Teaching and Learning Forum and was interested to hear some of the key challenges that Vice Chancellors face in Australia at the moment. They are:

[This blog post will focus on the first two points and the third point will be discussed in a subsequent post.]

The first two points are clearly supported by the recent excellent report authored by Andrew Norton from the Grattan Institute – http://grattan.edu.au/wp-content/uploads/2014/10/816-mapping-higher-education-20141.pdf – and much of the following is extracted from this report.

In 2013 the revenues of Australia’s 40 full universities (includes Torrens University Australia), and about 130 other higher education providers exceeded $27 billion and it is interesting (scary) to see the huge importance of international student enrolments as they contributed approximately $5.1 billion of this revenue.

This is unsustainable and I fear that with the likelihood of the Pyne Package MkII not passing the Senate this will mean the Federal Government will look to cut Higher Education costs with no offsets for the sector.

“Massification” is a clumsy term but it does describe the huge increase in student numbers in Higher Education in Australia in the 21st century (see figure below): 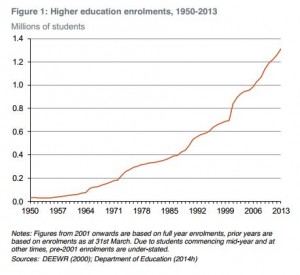 These numbers are made up of about 1M domestic students and just over 300,000 international students.  This growth is being seen in both undergraduate and postgraduate areas and is having wide-ranging effects including:

This is certainly not an exhaustive list but is meant to illustrate the changing macro environment in which educational technology companies such as Blackboard are working and helps to guide what combination of products, services and consulting can best assist the strategic direction of the university as it seeks to succeed in an increasingly competitive sector.