In 2013 Edutechnica published a blog entitled “Data-driven Campus LMS Strategy” and included Australian universities identified from the Australian Open Data site. At the time I responded in the comments section that I thought the results for Australia were flawed and a better data set to use was http://education.gov.au/selected-higher-education-statistics-2013-student-data but I see that the ‘Comments’ section is closed and this criticism was not published.

Now that Edutechnica have again analysed LMS usage in Australia (and other countries) using the “same set of institutions used in 2013 to keep this data uniform” it has prompted me to write this blog to correct the record about LMS usage in the Australian universities.

Put simply, it is generally accepted that there are 39 universities (38 public, 1 private) in Australia. Given the small number of universities and my knowledge of the sector I know that there are 20 (51%) universities which use Blackboard as their enterprise LMS, 16 (41%) use Moodle, and 3 (8%) use D2L. It is acknowledged that there are some departments within universities that use another LMS but according to Edutechnica’s methodology these were excluded from their analysis. 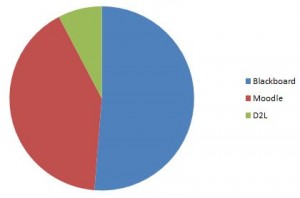 The reference to the Sakai usage in 2014 and not in 2013 is interesting in that Charles Sturt University (CSU) was the only university in Australia using Sakai until they made a decision in 2013 to move to Blackboard. I can’t explain why this wasn’t shown in the 2013 data and in 2014 this would represent a legacy LMS as CSU is well advanced in their transition to Blackboard.

So what is the point of this critique? Firstly, it is very easy in today’s connected world for information to be promulgated without critical review – I know I fall into this trap daily with retweets! Secondly, the work of Edutechnica to automate the capture of LMS usage data is good in principle but it must still be seen as a “work in progress” as demonstrated by their results for the Australian university sector.

Addendum:
If we want to consider all HE providers (including universities) in Australia then a definitive list is available from TEQSA at http://www.teqsa.gov.au/national-register/search/provider. This lists 176 registered HE providers at time of access (25-Sep-2014).

The Australian Government Department of Education at http://docs.education.gov.au/system/files/doc/other/2013listofinstitutions.xls also provides a list of HE providers for 2013 but only lists 133 registered HE providers. The interesting point to note from this spreadsheet is that the 39 universities referenced above account for 94% of the total number of students attending Australian HE institutions as listed.